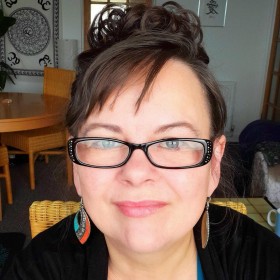 Jo Nash, Ph.D., is a writer, editor, and writing coach. Jo obtained her Ph.D. in Psychotherapy Studies from the University of Sheffield, where she was a Lecturer in Mental Health at the Faculty of Medicine for over a decade.

After completing her initial training in MBCT at the University of Wales in Bangor, she spent three years studying the roots of mindfulness with a range of Buddhist teachers in India.

In 2010, Jo returned to the UK to train in ACT, and in 2011, was appointed Honorary Senior Lecturer in Buddhist Psychology at Sri Lanka International Buddhist Academy (SIBA), the higher education college of Kandy’s famous Tooth Temple.

Today, Jo combines her passion for language with mindfulness skills when coaching writers to help them cultivate flow and optimize productivity. She is the creator of the ‘focused flow’ approach to writing coaching.

A Personal Message From Jo

My extensive study of human psychology from both Western and Eastern perspectives has taught me that suffering is the gateway to wisdom, as well as compassion for ourselves and others. I have learned that making space for both pleasure and pain is the source of creativity and meaning. My work remains committed to honoring the full range of human experience with gratitude for the adventure that makes life worth living. You can read more of my musings on my blog Focused Flow.

Why Should You Trust What Jo Writes?

Jo has over thirty years’ experience working in the mental health field from a range of perspectives, including psychiatric nursing, psychoanalysis, and mindfulness-based psychological therapies.

As a writing coach, her approach focuses on enhancing creativity and productivity using a range of positive psychology tools. Her writing invites readers to discover the latest research and practice that aims to optimize human experience. Cognitive coaching is a person-centered intervention model that helps coachees develop into self-directed learners with metacognitive skills that optimize professional practice. It was pioneered as [...] Expressive arts therapy is a multimodal holistic health intervention that mobilizes creative expression in the service of healing both mind and body. It is especially [...] Systematic desensitization is used to treat extreme aversions through a combination of graded exposure and relaxation. It is an evidence-based behavioral intervention that is focused [...] Feeling stressed? Take a few moments to focus on your breath rising and falling while sitting comfortably with a straight back in a quiet place. [...] What Is Behavior Therapy? Your Ultimate Practitioner’s Guide

“Behavioral modification therapy is as easy as ABC: antecedents, behavior, consequences” was a catchphrase we used when I was a mental health nurse preparing long-stay [...] Visualization is a component of many meditation practices, including loving-kindness meditation (or metta) and the other three Brahma Viharas of compassion, appreciative joy, and equanimity [...] Guided meditation is a great starting point for those new to meditation and a great way to refresh your practice if you are a seasoned [...] Self-soothing is an emotional regulation strategy used to regain equilibrium after an upsetting event. Most of us are familiar with soothing others when they are [...]

Acceptance and Commitment Therapy (ACT) is one of the third wave of mindfulness-based cognitive-behavioral therapies and has accumulated a huge scientific evidence base demonstrating its [...] How to Perform Psychoeducation Interventions: 14 Topics

Why? Why? Why? Toddlers’ endless questions, followed by even more questions after every answer, equip them with an understanding of the world around them. We [...] The Wabi Sabi Lifestyle: How to Accept Imperfection in Life

Wabi sabi and kintsugi have their historical origins in the aesthetics of the Japanese tea ceremony that upholds the Zen Buddhist values of purity, harmony, [...] Maranasati Meditation: How to Practice Mindfulness of Death How to Apply ACT in Group Therapy: 3 Workshop Activities

Offering Acceptance and Commitment Therapy (ACT) in groups benefits participants by providing support when clients realize they are not alone with their struggles. Working in [...] Healthy relationships are essential for living a meaningful and fulfilled life. The quality of our relationships with others affects our personal and professional lives and [...] We’ve all heard the saying ‘what does not kill you makes you stronger.’ Post Traumatic Growth, or PTG, explains how trauma survivors can not only [...] What Is The Good Life & How To Attain It

There has been a great deal written and said about how to live The Good Life. Yet with more than 8 billion people on this [...]

The 5 Founding Fathers and A History of Positive Psychology

Positive psychology emerged during the late twentieth century as a branch of psychology concerned with the scientific study of wellbeing and the ‘good life’. The [...]