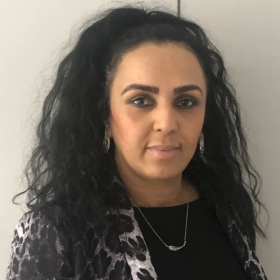 Based in the UK, she has worked with clients from all over the world. Her interests are diverse in all aspects of the human psyche, and her passion is about developing individuals to their full potential.

Why Should You Trust What Saima Writes?

Saima is an avid reader, writer and researcher and gets straight to reading and researching anything new, be it in print or word of mouth, to ensure it has integrity. Her writing is always thoroughly researched, to ensure it is credible and not just hearsay. In addition, Saima loves informing others, and it is important for her to educate with the knowledge she has gained. How to Train in DBT: 8 Best Courses and Online Programs

Sometimes experimentation and error can lead to a wonderful discovery. That is how many great innovations came about. Did you know that Dialectical Behavior Therapy [...] What Is Bullying? A Look at Its Psychological Impact

Bullying is certainly an unusual yet interesting phenomenon. If you ask most people, they are likely to say that they have been the victim of [...] How to Support Clients With Job Loss Depression & Stress

When you meet someone for the first time, they will ask your name. The next question is likely to be about what you do for [...] PTSD Treatment: How to Support Clients Dealing With Trauma

You may burst into laughter at the very thought of laughter yoga. Go ahead; we won’t stop you from having a good chuckle at our [...] Stress levels in modern society are super high, and that is no secret. Many people struggle to cope with life’s demands and inadvertently develop bad [...]

Positive Intelligence: How to Overcome Saboteurs in Coaching

Positive intelligence has become a popular term in the executive coaching world. It is the new ‘intelligence’ of this decade, just as emotional intelligence was [...] When looking at job vacancies, how many times have you thought to yourself, ‘Is this job right for me?‘ only to find out it really [...] Have you ever met someone brimming with confidence and communication skills, and thought to yourself, ‘I want to be like them‘? Social skills can be [...] What Is Cognitive Development? 3 Psychology Theories

Cognitive development is certainly not an easy topic to grasp. But don’t worry, we will try our best to help you with the essentials of [...] A formalized response to the social needs of individuals, communities, and society has existed throughout the centuries. Before the advent of social work as a [...] Developmental psychology looks at how we grow and change in our thoughts and behaviors. You can imagine how vast this field of psychology is if [...] The military has a varied task force. You don’t have to become a soldier; there are many possibilities for more unusual jobs. For instance, there [...] Can you think back to when you were in school and the bell rang for lunch? Did you experience a rumble in your stomach, even [...] What Are Life Domains & How Can We Balance Them?

Juggling is a mind-boggling skill, and for me to juggle just 3 balls requires all of my attention, never mind juggling 6 torches, 10 balls, [...] These days you can find a coach for almost anything. There are life coaches, business coaches, performance coaches, and health coaches. But have you heard [...] Is Motivational Interviewing Effective? A Look at 5 Benefits

Have you ever had a conversation with a friend and been persuaded to make a positive change? Think back now. What was it they said [...] How many times have you heard the phrase ‘money can’t buy happiness?’ If you were given a dollar each time you heard it, by now, [...] Attachment Styles in Children (& How to Raise Secure Kids)

As a parent, have you ever wondered how your child’s attachment to you would affect them as an adult? Would they become a ‘mama’s boy’ [...]