What is Positive Gossip? + 7 Examples When you read the words “positive gossip,” what comes to mind?

It is difficult to imagine that anything about gossip could be positive?

Most of us picture two people huddled close, one whispering in the other’s ear, eyes darting back and forth.

Some of us envy them and want to be in on the secret. We love hearing the latest news about anyone and everyone. Of course, some people swear that gossip is wrong. After all, it has caused relationships to end. People have lost their jobs and reputation.

If gossip is so wrong, why do people do it? You might tell yourself that you do not engage in gossip, but are you sure?

On average people spend 52 minutes per day gossiping (Robbins & Karan, 2019). Novelist Joseph Conrad once said, “Gossip is what no one claims to like, but everybody enjoys.”

As you will soon discover, there is such a thing as positive and even neutral gossip. You will also learn that gossip, whether it is negative, positive, or neutral, serve a purpose in every society. It has since humans began speaking.

Before you continue, we thought you might like to download our three Positive Relationships Exercises for free. These detailed, science-based exercises will help you or your clients build healthy, life-enriching relationships.

What is Positive Gossip? A Definition

Gossip in more recent years has a negative connotation. Most, if not everyone, has dealt with the dark side of it. Researchers are not looking at positive gossip per se, but rather, the different forms of gossip. They also are studying how and why gossip evolved in people.

For now, we will use the definitions provided by Fox (2001) taken from the fields of sociology and psychology. Gossip is, “evaluative talk about a person who is not present.”

Additionally, it is “the process of informally communicating value-laden information about members of a social setting.” These definitions do not state that the gossip is slanderous or vile about someone. In fact, gossip might not even be critical in nature.

Most gossip involves sharing who did what with whom. This is not always negative. Some other functions of gossip are to get or give advice about how to navigate a social situation. Gossip also does not only or always involve an absent third person. It is possible to gossip about oneself. For example, a person might strategically share information about oneself to bolster one’s status or appeal.

Gossip, whether it is negative or positive, serves several purposes (Fox, 2001).

Gossip is a type of grooming. In apes, this is a physically time-consuming activity. Psychologist Robin Dunbar (1996) asserted that language development happened so that humans could “groom” each other more efficiently. Ape troops are smaller, on average, than human social groups. Dunbar believed the ideal number for human social groups is 150 (Fox, 2001). Gossiping among a group of this size is easy to manage.

Consider what it might have been like for early humans if they had not shared information. Who could one trust? What if the best hunter was ill? How might that affect the food supply? These are simple but critical examples. Today, food is not necessarily a concern, but we still need to know who we can trust. We need to know who is cooperative.

Their findings revealed the following: Here are a few ways you can engage in positive or neutral gossip:

Is There any Research on the Topic?

Most current and past research focus on the effect gossip have on people and within organizations (see Noon & Delbridge, 1993) but not specifically on positive gossip. While many people are likely to agree that gossip is bad, researchers argue that this is not always the case. Social scientists study positive, negative, and neutral forms of gossip.

When researchers consider ‘positive gossip,’ they concern themselves with prosocial behavioral responses. For example, if a person shares information that helps the group avoid the adverse effects of a norm-violating peer, then this is a form of positive gossip. It is also positive when a person witnesses the norm-violation and shares the outcome because this can help others correct their behavior (Alshehre, 2017).

As mentioned early in this article, most gossip is neutral. When gossip is not neutral, it still serves a purpose. Gossip columnist Elaine Lui argues that it provides insights into societal norms. The Sociology of Gossip is an excellent reminder that what gets repeatedly shared gets remembered. To be more precise, here are some examples:

Negative gossip can destroy a person’s career and life if taken too far.

On the flip side, positive gossip, i.e., the prosocial type, can encourage self-improvement. Whatever gossip you are sharing can give you insights into why you are unhappy in the situation.

The trick is recognizing this and engaging in some self-analysis and restraint. To do this, it is wise to share your gossip with someone you trust, instead of every co-worker you encounter. That person can help you think about the situation. Sometimes hearing yourself vent is enough to help you find solutions.

Feinberg, Willer, Stellar, and Keltner (2012) studied the effect of sharing reputational information. They learned that witnessing antisocial behavior (cheating, for example) led to increased heart rates in the observers. Heart rates decreased when the observers were able to share the information about the behavior with others who might become victims.

Their study also revealed that people with a high prosocial orientation tend to engage in this type of gossip most often. They will even do it if they stand to lose something. Feinberg and colleagues found that prosocial gossip “can effectively deter selfishness and promote cooperation.”

A Look at Positive Gossip in the Workplace

Gossip does not always yield cooperation from noncooperators, at least not long term (Dores Cruz, Beersma, Dijkstra, & Bechtoldt, 2019). When gossip about a norm-violator is true, targets increase their cooperation. This effect is short-term because it is primarily an effort to get back into the good graces of the group. When the gossip about the person’s norm-violating behavior is false, cooperation does not change.

Whether the gossip is true or false does not change the norm-violator’s intention to cooperate in the future. Generally, gossip is a form of punishment. As such it is a temporary, extrinsic motivator. The target’s intrinsic motivation to cooperate decreases. A group could use workplace gossip to force cooperation in the short-term, but future group cohesion might suffer (Dores Cruz et al., 2019). Divide the group into smaller groups of three. In each group, there is a gossiper, a receiver, and the gossipee. The gossiper begins by saying something positive about the gossipee. The receiver listens, then begins a response with, “Yes, and.”

The gossipee makes a mental note about what positive things each person said. Then the roles switch until each person has had an opportunity to be the gossipee. The larger group forms a circle to share what positive comments the others said about them.

For example, the gossiper might say, “Jane is helpful and encouraging.” The receiver responds with, “Yes, and she offers great suggestions and feedback on projects.”

Divide the larger group into smaller groups of three. Group members communicate what they want using positive language. One member flags the speaker if the speaker uses negative vocabulary like “without,” “not,” or “don’t.”

The speaker begins by sharing a story. The story should be nonfiction. The interviewer asks questions, and the indicator alerts the speaker to any negative language. Roles switch so that everyone participates in each role.

For example, the speaker might say, “I want to return to school to get a master’s, but I don’t have the time or money.” The interviewer might ask, “What do you want to study?” The indicator might say, “’Don’t’ is a negative way to describe that.” The speaker could respond with, “I feel pressed for time, and school is expensive.”

3. How to play werewolves

The group forms a circle. Each person receives one of two types of cards, either “villager” or “werewolf.” No one shares what their card says. Gameplay has two phases, night and day. You begin in the night phase and alternate until either the villagers or werewolves win.

The facilitator instructs everyone to open their eyes. She is the only witness and tells the werewolves’ victim to hand in their card.

The villagers discuss who to eliminate from the game. The werewolves participate too because no one knows who they are. This is where things get interesting. If you have ever seen shows where people get voted off, this is exactly what the villagers do. After voting, the facilitator asks the victim to reveal their card and play continues.

We hope you enjoyed reading this article. Don’t forget to download our three Positive Relationships Exercises for free.

Positive gossip includes prosocial behaviors that increase group cooperation and decrease selfishness. Gossip strengthens social bonds and helps to resolve conflicts. It informs us about social norms. Not all gossip causes harm, and most of the time, it is neutral.

Stereotypes about women gossiping more than men are untrue. Movies, advertisements, and literature supporting this fallacy might be entertaining, but as Elaine Lui pointed out, this is the legacy we are leaving.

Consider this, a room without gossip is empty — everyone gossips. If you want to move away from negative gossip, start using the THINK approach, this will help you move toward sharing more neutral or positive gossip.

References
About the author
Kori D. Miller, MA, is a habit change aficionado, facilitator, and coach. Kori loves helping others achieve their goals one bite-size step at a time. She completed graduate-level coursework in positive psychology through the University of Missouri-Columbia and is completing a master's program in Educational Psychology with a specialization in neuropsychology. 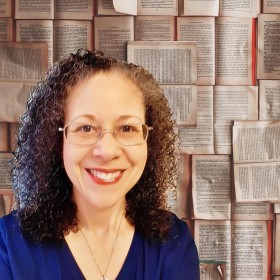 Bullying in the Workplace: 24 Examples & Ideas for Supporting Adults